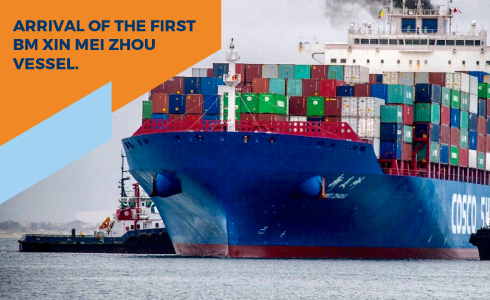 On Friday, May 11th, Hutchison Ports EIT held an inauguration ceremony of the COSCO Shipping with the service WSA3 and the arrival of the first BM XIN MEI ZHOU vessel.

The port authorities represented by Lic. Héctor Bautista, Director of the Integral Port Administration and the Captain of the Port, Antonio Maas, as well as executives of Hutchison Ports Mexico, executives of the Shipping Line and end users gathered at the pier of Hutchison Ports ECV, to witness the arrival of the vessel of 332 m in length and 43 m in beam, adorned by a show of tugboats and a flamenco dance group.

For the Ensenada International Terminal Multipurpose Terminal (EIT), the opening of the service will represent a logistic growth for the area of ​​influence and will allow arrivals to increase from four to six per week.

Javier Rodríguez Miranda, General Manager of Hutchison Ports EIT, said that this new service operated by 11 vessels with a rotation of 77 days will provide faster and more frequent transit times between Asia, the West Coast of Mexico, as well as Central and South America. He pointed out that by the end of the year they expect to be able to receive 2 quay cranes (Super Post Panamax) and another 2 RTG cranes. With the cranes that come, 2 are for the dock and 2 are for the yard, there will be a total of 8 for the yard and 3 for the dock.

Currently, Ensenada International Terminal has made an investment of 100 million dollars to improve its infrastructure. It includes the extension of the container wharf, to 150 meters, with which it will add 450 meters in length. In addition, the expansion of 20% of the concession area is scheduled, already authorized by the Port Authority, which will be suitable for full and empty container yards. This year, 1 Ha of the 2.8 Ha total will be expanded. Before 2021 the filling and paving works of the 2.8 Ha of expansion will be completed.